In 2010, venous thromboembolism (VTE) was the third leading cause of mortality among pregnant women in France accounting for 0.95 deaths per 100 000 deliveries; one-third of the deaths were considered to be avoidable. The highest risk period is postpartum and the increased risk persists for 6 weeks postpartum. During this period, the risk of pulmonary embolism is higher than the risk of deep vein thrombosis. Risk factors differ in the antepartum and postpartum period, but both clinical and genetic risk factors are important for predicting VTE during pregnancy and postpartum. Recent data indicate that 50% of postpartum women had two or more risk factors and that interactions between these risk factors are important; obesity, in particular, warrants consideration. VTE risk assessment should therefore be performed and repeated in every pregnant woman. This has been highlighted in the guidelines of the Royal College of Obstetricians and Gynaecologists. With better identification of postpartum risk factors, health care providers may be able to reduce the rate of maternal deaths resulting from pulmonary embolism.

Pregnant women have a four- to fivefold increased risk of symptomatic venous thromboembolism (VTE) compared with nonpregnant women, with an estimated incidence of one to two per 1000 pregnancies.1-5

In developed countries, pulmonary embolism remains one of the most common causes of maternal mortality: VTE accounts for 1.1 deaths per 100 000 deliveries.6 In France, VTE is the third leading cause of mortality among pregnant women accounting for 0.95 deaths per 100 000 deliveries. In the 2010 Bulletin Epidémiologique Français, one-third of the deaths were considered avoidable. The prevalence and the severity of this condition warrants careful management including the identification of risk factors.

Epidemiologic research assessing potential VTE risk factors in pregnant women has some limitations, such as the grouping of antenatal and postnatal VTE, despite potential different levels of risk and different risk factors. The objective of this article is to review the literature focusing on postpartumVTE risk.

Postpartum is the highest risk period

Historically, the last trimester and immediate postpartum were considered the highest risk periods for deep vein thrombosis (DVT) and pulmonary embolism (PE). However, more recent studies have shed further light on these data. Symptomatic VTE is estimated to occur antepartum (from conception to delivery or to 40 weeks) in 5 to 12 per 10 000 pregnancies, with events equally distributed throughout all three trimesters.7 Postpartum (6 weeks) VTE is estimated in 3 to 7 per 10 000 deliveries.8 Compared with age-matched, nonpregnant women, this translates into a per-day risk that is increased seven- to tenfold for antepartum VTE and 35-fold for postpartum VTE.1,2 In a meta-analysis of 14 studies (1966-1998), the estimated relative distribution of 100 DVT events was 0.23 per day during pregnancy and 0.82 per day in the postpartum period.7 More recently, Pomp et al reported a fivefold increased risk during pregnancy and a 60-fold increased risk during the first 3 months after delivery compared with nonpregnant women.5

What is the duration of the postpartum risk?

In the case-control study of Pomp et al, the risk for both PE and DVT was increased, with a relative risk of 34.4 and 72.6, respectively.5 In the meta-analysis by Ray et al, two-thirds of DVT events occurred antepartum,7 while 43% to 60% of PE events occurred postpartum in two others studies.8,10 More recently, Heit et al, using the Rochester registry, found that PE was relatively uncommon during pregnancy versus postpartum (10.6 vs 159.7 events per 100000 women-years).2 In a hospital-based case control study and a registry-based case-control study, Jacobsen found PE more common after delivery (0.22 vs 0.006 per 1000 deliveries).3,11 In a large Australian cohort, Morris et al reported similar results: PE was most frequent postpartum (61.3%) with a rate of 0.45 per 1000 births.9 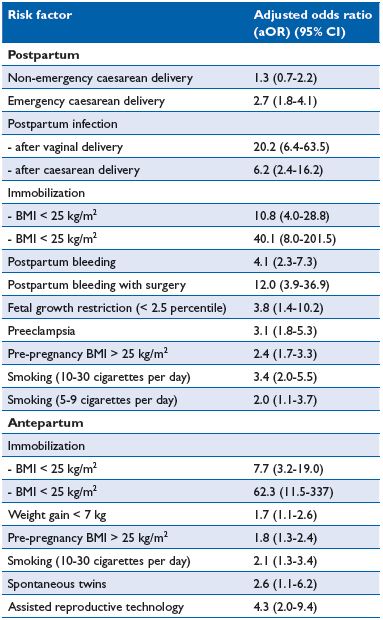 WHAT ARE THE RISK FACTORS FOR VTE POSTPARTUM? HOW SHOULD THEY BE MANAGED?

A large, well-conducted Norwegian case-control study compared 559 women with pregnancy-associated VTE with 1229 controls. The study used the same group of cases as reported in a previous population-based registry study,3 but a different control group to allow investigation of other risk factors. The authors reported a number of new complex risk factors and different ante- and postpartum risk factors (Table I).11 Of particular interest was the fact that 50% of postpartum women had two or more risk factors and 50% had no or only one risk factor.

The most important individual risk factor for VTE is a personal history of thrombosis,6 particularly when unprovoked or associated with oral contraceptive use or VTE in pregnancy. Few studies have analysed separately the ante- and postpartum periods. Two large retrospective cohorts reported a very high risk of recurrence during the postpartum period.12,13 Pabinger et al found that 4 of 65 women (6.1%) who had not received thromboprophylaxis experienced VTE compared with 5 of 73 women (6.9%) who had received prophylaxis.13 In a cohort of 88 women with a previous episode of VTE who became pregnant at least once without receiving antithrombotic prophylaxis, 120 puerperium periods without prophylaxis were recorded with a postpartum VTE recurrence rate of 8.3%.12

All published guidelines, including American, British, Australian, and French are in favor of thromboprophylaxis, usually for 6 weeks postpartum in case of previous VTE, regardless of the mode of delivery.

Pregnant women with thombophilia and previous VTE
Data regarding thrombophilia and the risk of recurrent VTE specifically during postpartum are inconsistent. De Stefano et al found that inherited thrombophilia, mainly factor V Leiden (FVL) and prothrombin gene G20210A factor II (FII) polymorphisms, was not associated with a statistically significant increased risk.12 As previously discussed, guidelines recommend that all women with a previous VTE event receive postpartum thromboprophylaxis whether or not they have thrombophilia.

Pregnant women with thrombophilia, no previous VTE with or without a family history of VTE
The risk associated with thrombophilic defects varies considerably both between defects and also between studies, probably reflecting differences in methodology (Table II). However, there is consensus that heterozygous FVL or FII polymorphisms are weakly thrombophilic and antithrombin (AT) deficiency (type I) is strongly thrombophilic.

Thrombophilia was not considered in the Norwegian study nor in the Australian registry.9,11 However, recently Jacobsen et al published a specific case-control study on the risk of venous thrombosis among carriers of FVL and FII.15 Among 559 women with a first VTE during pregnancy or within 14 weeks postpartum, and 1229 controls, 313 cases and 353 controls could be investigated for thrombophilia screening. The ORs for FVL and FII were 4.2 (95% CI, 2.4-7.4) and 10.2 (95% CI 2.1-49.8), respectively. The authors estimated that pregnancy-associated VTE occurred in 1.1/1000 noncarriers, 5.4/1000 FVL heterozygotes, and 9.4/1000 FII heterozygotes. The number of pregnant women to be screened and the number needed to be provided with prophylaxis was 2015 and 157, respectively, for FVL and FII. Heit et al also estimated that the absolute risk is very low arguing against prophylaxis in the absence of a personal or family history of VTE and weak thrombophilia.2 However, when a positive family history is present, the absolute risk is higher with an incidence of 2% to 3%, two-thirds in postpartum.16 In a multicenter family study, Martinelli et al found no VTE during pregnancy, whereas in the postpartum period VTE occurred in 1.8% 1.5%, 1% and 0.4% in double carriers, FVL, FII, and noncarriers, respectively.17 In the European Prospective Cohort on Thrombophilia (EPCOT), the highest incidence was associated with AT deficiency or combined defects and the lowest incidence with FVL.18 In a retrospective family cohort study with AT, protein C (PC) or protein S (PS) deficiencies, the frequency of pregnancy-associated VTE was 7% (12/162), two thirds in postpartum (8/12); five cases were in AT-deficient women.19 In a review, the estimated incidence of a first VTE in carriers of various thrombophilic defects in postpartum was 3% (1.3- 6.7) for AT, PC, or PS deficiencies, 1.7% (0.7%-4.3%) for FVL, and 1.9% (0.7%-4.7%) for FII.16 Individuals with AT deficiency have historically been regarded to be at very high risk of thrombosis, particularly during pregnancy.16

The 9th American College of Chest Physicians (ACCP) guidelines suggest postpartum clinical surveillance rather than pharmacologic prophylaxis (grade 2C) for FVL or FII heterozygous pregnant women without a family or personal history.21 The Practice Bulletin of the American College of Obstetricians and Gynecologists has similar recommendations.22 Lussana et al in the Italian recommendations suggest clinical surveillance in women at low risk, including those with any thrombophilia without previous VTE and without a positive family history of VTE.23 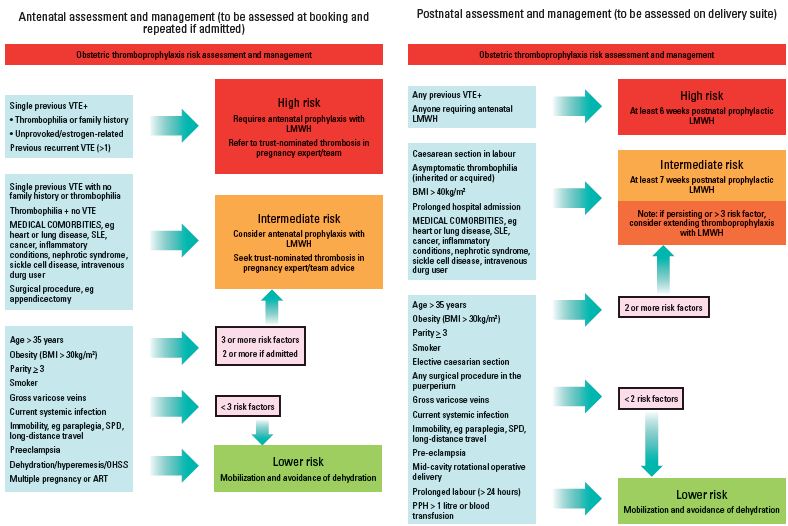 Figure 1. Obstetric thromboprophylaxis risk assessment and management from the Green-top Guidelines No. 37a, 2009, Royal College of Obstetricians and Gynecologists20

Several studies have reported that usual prophylactic dosage regimens are not fully effective during the postpartum period.13 How to identify these women at higher risk remains a challenge.

Can we identify new biological risk factors?
Established family risk factors cannot be detected in many families with a clustering of VTE. Individuals who have a first-degree relative with a history of VTE are at increased risk of VTE almost independent of known heritable risk factors, which suggests that there are unknown genetic risk factors.24 Recently, genome-wide association studies on VTE have been published.25 This approach has been used to investigate genetic causes of pregnancy-related VTE. Using the Norwegian hospital case-control study,26 Dahm et al found new associations between single nucleotide polymorphisms (SNPs): seventeen SNPs were found to be associated, and one SNP belonging to the gene encoding P-selectin was associated with postpartum VTE. These results need to be confirmed in further studies.

Antiphospholipid syndrome is defined by venous or arterial thrombosis and/or specific pregnancy complications with persistently positive tests for antiphospholipid antibodies. It is common for such women to be on long-term anticoagulation after a first thrombotic event because of an increased risk of recurrence. These women receive antenatal therapeutic doses of low molecular weight heparin (LMWH) (those on warfarin convert to LMWH before 6 weeks of pregnancy) until after delivery and then switch back to oral anticoagulants. However, the optimal management of such women for the prevention of recurrent thrombosis is difficult as there is a lack of trials of women with APS during pregnancy and prior thrombosis. In the Bauersachs et al study of 28 women, two thrombotic events occurred postpartum despite treatment, highlighting the very increased risk.27 These women require close management with collaboration between different experts including a haematologist.

Women not on anticoagulants should start LMWH as soon as possible in the first trimester, which should be continued for at least 6 weeks after delivery. Recently, the first report of the European Registry on Obstetric Antiphopsholipid Syndrome (EUROAPS) was published.28 In the presence of antiphospholipid antibodies alone, without APS, RCOG suggests LMWH for 7 days postpartum.

The association between caesarean delivery and VTE was previously confounded by many independent VTE risk factors. In the Australian registry, caesarean section carried an increased risk regardless of whether it was performed in the presence (aOR 3.7) or absence (aOR 3.11) of labor after adjustment.9 The point estimate risk for caesarean section during labor was higher than without labor, but this could have been due to chance (P=0.46). In the Norwegian study, uncomplicated caesarean delivery was not associated with an increased risk after adjustment for complications.11 On the other hand, postpartum infection after vaginal delivery remained a stronger risk factor than postoperative infection after any type of caesarean section.

Most studies have not found a significant association with smoking. However, Jacobsen et al reported an association of smoking with ante- and postpartum VTE (5-9 and 10-30 cigarettes/day prior or during pregnancy).11

Postpartum is the highest risk period for VTE. There are differences in antepartum and postpartum risk factors and both clinical and genetic risk factors are important for predicting VTE during pregnancy and postpartum. Recent data have shown that it is important to systematically assess individual VTE risk, taking into account all risk factors, both antenatal and postnatal. VTE risk assessment should be performed and repeated in every pregnant woman. By improving identification of postpartum risk factors, health care providers may be able to reduce the rate of maternal deaths resulting from PE.