What have we learned from the Bonn Vein Study?

Between November 2000 and March 2002, the German Society of Phlebology, in cooperation with the german ministry of health, performed the Bonn Vein Study in the city of Bonn and two rural townships. The participants were chosen from a simple randomized sample taken from the population registers. In total, 3072 (1722 women, 1350 men) participants between 18 and 79 years of age were investigated. Only 9.6% of the population (13.6% men, 6.4% women) showed no signs of venous disorders (C0) according to the CEAP classification, while 59.1% (58.4% men, 59.5% women) showed only telangiectasias or reticular veins (C1). In 14.3% (12.4% men, 15.8% women), varicose veins were present without edema or skin changes (C2), while 13.4% (11.6% men, 14.9% women) had pitting edema of the lower limbs at the time of the investigation (C3). Only 2.9% (3.1% men, 2.7% women) showed CEAP stage C4 with skin changes, like eczema, pigmentation, or lipodermatosclerosis. Even fewer, 0.6%, showed healed venous ulceration (C5) and active venous ulcers, 0.1% (C6).
The frequency of more severe chronic venous signs, like eczema, pigmentation, lipodermatosclerosis, or venous ulceration has markedly decreased in the last two decades. This may be due to the fact that diagnostic and therapeutic options were applied more frequently within this period.

Epidemiological evaluations of chronic venous disease were performed in many countries. Most of these were focused on varicose veins.1-12 In reviewing this data, some principal problems arose. Different definitions were used for either varicose veins or chronic venous insufficiency (CVI) in the studies.10 The investigated age groups also varied and different definitions were used. Only in very few cases was the investigated population based on a random sample of the general population. In many studies, only anamnestic data from questionnaires was used. In the earlier studies, the prevalence of varicose veins ranges from 1% to 73% in females, and 2% to 56% in males, while chronic venous insufficiency ranges from 1% to 40% in females, and from 1% to 17% in males.1 Results vary by geographic region as well as by the methods used for evaluation. The incidence of varicose veins per year in the Framingham study was 2.6% in women and 1.9% in men.3

One of the larger studies of the late 70s was the Tübinger Study. The participants were between 20 and 75 years of age. The results were based on a standardized questionnaire and on standardized photographic documentation of the legs.7 For classification of the findings, the Widmer classification was used. In this study, only 14% of the population showed no venous changes while 51% had corona phlebectatica and slight venous changes (Widmer I), 40% had marked varicose veins with clinical relevance, and 13% had severe chronic venous insufficiency with skin changes up to venous ulceration. In this study, 76% of the women and 57% of the men had leg complaints thought to be typical of venous complaints (eg, heaviness). Finally, 2.7% had healed or active venous ulcerations.

In the 90s, the most representative population-based study concerning the prevalence of chronic venous disease came from Great Britain. The Edinburgh Vein Study examined a randomized sample of 1566 men and women taken from the registers of general practitioners in Edinburgh. The subjects, who were aged between 18 and 64 years, were asked to complete a standardized questionnaire and were investigated clinically and by duplex sonography. Forty percent of the male and 32% of the female population had saphenous varicose veins. More than 80% had telangiectasias or reticular veins. Chronic venous insufficiency classified by the Widmer classification in stages II and III was found in 9% of the male and 7% of the female population. In agreement with the Tübinger study, the Edinburgh Vein Study showed a significant increase in prevalence of chronic venous disease with age.2,6,13

In recent years, three studies have been published that are based on the CEAP (Clinical, Etiological, Anatomical, Pathophysiological) classification.13 However, their mode of recruitment of the study population, age range, and mode of investigation vary (Table I).14-16 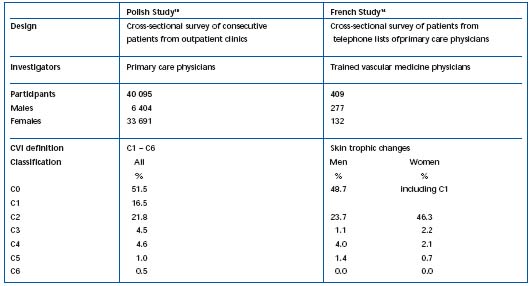 Table I. Prevalence of C0 to C6 (CEAP) in the Polish study and the French study.

In one study, 40 095 Polish adults were interviewed and clinically investigated by 803 participating primary care physicians (general practitioners, internists, gynecologists) in a cross-sectional multicenter study.15 C of CEAP (highest clinical severity) was used to classify the patients. CVI was diagnosed when any of the stages C1 to C6 was present. Leg complaints were reported in up to 81% of the varicose veins group and up to 35% of the varicose-free participants. C0 was found in 51.1% of the population, C1 in 16.5%, C2 in 21.8%, C3 in 4.5%, C4 in 4.6%, C5 in 1.0%, and C6 in 0.5%. Risk factors for CVI and varicose veins were similar among patients.

In a French cross-sectional study using a subpopulation of a survey of Raynaud phenomenon,14 409 participants (277 males, 132 females) were investigated using a standardized questionnaire and clinical examinations performed by trained vascular medicine professionals. Of these, 48.7% had C0 or C1, while C2 was present in 23.7% of the males and 46.3% of the females. C3 was found in 1.1% and 2.2% of males and females, respectively, with C4 (skin changes) occurring in 4.0% of the men and 2.1% of the women. Healed ulcers were found in 1.4% of the males and in 0.7% of the females. No active ulcers were observed in this study.

Positive family history, advanced age, pregnancy and height in women, and exercise performed less than once a week in men were the main risk factors for varicose veins.

Between November 2000 and March 2002, the German Society of Phlebology, in cooperation with the ministry of health, performed the Bonn Vein Study in the city of Bonn and two rural townships. The participants were chosen from a simple randomized sample taken from the population registers. In total, 3072 (1722 women, 1350 men) participants between 18 and 79 years of age were investigated.16 All participants answered a standardized questionnaire including the short-form health survey (36 items) (SF-36) quality of life questionnaire17 and standardized questions from the German health survey,18 and were investigated clinically and by duplex sonography. The complete CEAP classification was used for classification of the findings. In the clinical classification, the participants were classified according to the most severe clinical findings. The participants were asked: have you had any of these symptoms (cramps, heaviness, etc) (Table II) in the last four weeks (day or night)? The results showed that 49.1% of the male and 62.1% of the female population had leg complaints related to the symptoms of venous diseases (eg, heaviness, sensation of swelling) (Table II). The prevalence increased with age (Figure 1). 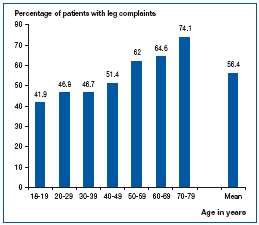 The prevalence of the stages C2 to C6 increased with age. Of the general population, 22.9% had had therapeutic procedures on their veins in the past, 12.7% of the men and 31.0% of the women (Table V). The most frequent therapy was compression stockings followed by venous surgery and drug treatment. 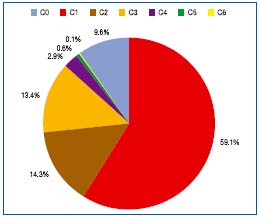 Figure 2. Distribution of C of CEAP classification in the Bonn Vein Study population.

Table IVa. Prevalence of clinical stages (CEAP) of chronic venous disease, according to habitat and gender of the Bonn Vein Study population.

The high prevalence of chronic venous disease in the general population is known from many studies.1,5,12 The comparability of the results from recent studies, in which the participants were properly investigated by clinical investigation, duplex sonography, and classified by CEAP, with older studies, in which only questionnaires and photography were used, is questionable. Due to the fact that the prevalence of chronic venous disease is ageand gender-dependent in most of the studies, all of the data has to be adjusted for these parameters at least. In addition, different classification systems were used. In the Tübinger Study,7 and in the Edinburgh Vein Study,2,6,10 the Widmer classification was used,11 while in the Bonn Vein,16 Polish,15 and French studies,14 the CEAP classification was used. Nevertheless, the results are comparable in some aspects.

In the Tübinger Study, 15% had clinically relevant varicose veins, while in the Bonn Vein Study, 14.3% had C2-stage without additional signs of chronic venous insufficiency. The overall prevalence of varicose veins, including those participants in stages CEAP C3 to C6, was 23%. The prevalence in the Edinburgh Vein Study was slightly higher with 40% of the men and 30.2% of the women having varicose veins. In the Polish study, the prevalence of C2 was 21.8%, and in the French study it was 23.7% for men and 46.3% for women.

The method by which pitting edema was verified was only mentioned in the Bonn Vein Study. This, and principal problems associated with the definition of this stage, may have caused differences in the prevalence of C3, which varied between 1.1% and 14.9%.

The prevalence of severe chronic venous disease (Widmer stages II and III, CEAP classification C4-C6) has decreased in the last 20 years. In the Tübinger Study, Widmer II and III were present in 13% of the population. In the Edinburgh Vein Study, the prevalence was only 1.8%, and in the Bonn Vein Study, 3.6%. The lower value in the Edinburgh Vein Study might be due to the fact that the study population was between 18 and 64 years of age, compared with the Bonn Vein Study, between 18 and 79 years. The prevalence of C4-C6 in the Polish study reached 6.1% and in the French study, 5.4% for men and 2.8% for women.

The prevalence of healed and active venous ulcers decreased from 2.7% in the Tübinger Study to 0.7% in the Bonn Vein Study, and 1.5% and 1.4% in men and 0.7% in women in the Polish and French studies respectively.

The prevalence of specific venous treatment is very high in the population of the Bonn Vein Study.

Chronic venous diseases like varicose veins and chronic venous insufficiency are among the most frequent diseases in Western populations.5,8 As a result, venous symptoms like heaviness of the legs and sensations of swelling and pain while standing are frequent complaints in the general population. The frequency of more severe chronic venous signs like eczema, pigmentation, dermatoliposclerosis or venous ulceration has markedly decreased in the last two decades. This might be due to the fact that diagnostic and therapeutic possibilities have been used more frequently in the last 20 years.