What is the best method of imaging in iliofemoral venous obstruction?

Iliofemoral venous obstruction is increasingly recognized as a major cause of post-thrombotic syndrome. Patients can be left with significant symptoms after just one episode of iliofemoral deep-vein thrombosis; ranging from milder problems, such as varicose veins, to itching, leg swelling, and even venous ulceration. With the advent of endovascular techniques to reconstruct the iliofemoral segment has come an understanding that accurate recognition and diagnosis form a central part of the puzzle. Clinical evaluation is limited, and imaging has assumed a central role. This article looks at the optimal method for imaging the iliofemoral venous segment.

A landmark study by Tom O’Donnell and Norman Browse in 1977 detailed the socioeconomic effects after IF-DVT; it demonstrated that 50% of men were unable to hold down a job just 5 years after IF-DVT, and after 10 years the majority had venous ulcers.2 Adherence to anticoagulation treatment, the clinical efficacy of the newer anticoagulants, and the use of compression stockings (the latter have come under scrutiny after the large SOX trial [Compression Stockings to Prevent Post-Thrombotic Syndrome]3) have all somewhat improved this dismal outcome; nonetheless, the morbidity from this condition is severe. The majority of post IFDVT patients who go on to develop venous ulceration typically pass through the following stages (although the order may vary): venous claudication, weight gain, development of varicose veins, skin changes, and eventually venous ulceration. The first two problems are not captured at all by current clinical methods for evaluation of venous problems.4,5 It is fairly obvious that one of the reasons patients continue to do so poorly clinically is that we are identifying patients much too late in their clinical trajectory–when they already have established PTS as opposed to earlier in its course. There is a mindset among physicians that all DVTs result in similar outcomes for patients, and the ATTRACT trial (Acute Venous Thrombosis: Thrombus Removal with Adjunctive Catheter-Directed Thrombolysis) did not help to alter this perception.6,7

Over the last quarter of a century, the advent of endovascular stenting has meant that there are now treatment options that are less invasive than an open surgical procedure to bypass the affected area.8-11 Therefore, there is increasing interest in identifying the best imaging options to identify this critical condition at an earlier stage in their disease trajectory.12-16 Table I shows advantages and disadvantages of various imaging modalities. 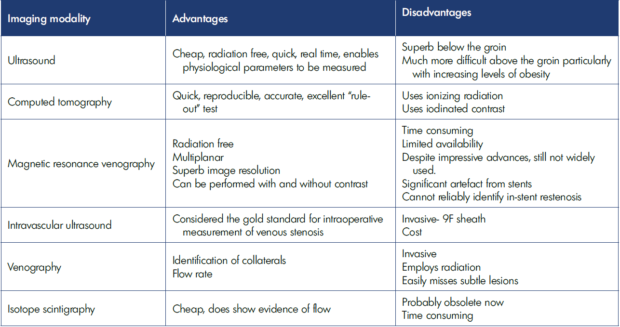 Table I. Advantages and disadvantages of imaging modalities for evaluating venous segments in post-thrombotic syndrome.

Color Doppler ultrasound (CDUS) by skilled operators is an excellent method (Figure 1). Although identification of occluded iliofemoral venous segments on its own may be difficult, CDUS is certainly excellent in identifying physiological flow issues below it, in terms of lack of respiratory variability and lack of response to augmentation.17-19

With IF-VO, the external iliac or common femoral vein Doppler waveform is typically flat and shows minimal to no change during respiration, deep Valsalva or a Müller maneuver (Figure 2).20 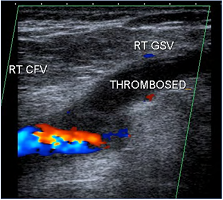 Often, the most useful aspect of ultrasound is the ability to compare one side with the other. In a patient with an occluded left iliofemoral venous segment, the right side will typically have grown to accommodate the extra flow, and then by comparison, the left will clearly be abnormally small. Obviously, this becomes more important in subtle lesions, where the discrepancy from side to side may well be less obvious. In slim patients and in skilled hands, it is the method of choice and should be used in every patient as an initial screening tool. If it is clearly normal, then the patient may not require any further investigation. If abnormal, the patient may require further investigation depending on symptoms, etc. Ultrasound is operator dependent, and if not personally performed by the endovascular specialist, the sonographer needs a special understanding of precisely what the specialist requires (inflow, outflow, potential access sites, etc). This information may not typically be obtained during a standard lower limb venous ultrasound, which for obvious reasons, tends to concentrate on reflux more than obstruction. Comparison between sides (right groin vs left groin) and identification of the profunda femoris vein (Figure 3) are both often neglected unless specifically requested. 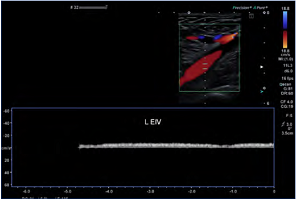 Figure 2. Although there is normal color flow in the left external iliac vein (L EIV), the Doppler signal suggests otherwise–note the flat tracing with minimal to no respiratory variability. There is a more central inferior vena cava (IVC) and iliac venous obstruction. Ultrasound demonstrates physiological changes as well as simple anatomical abnormalities.

Ultrasound is the imaging modality of choice in follow-up of previously stented areas because the stent segment can usually be identified with certainty (unlike in unstented iliac veins) and, obviously, it is radiation free. The evaluation of instent restenosis is also possible (Figure 4) with this method, and it is the most practical for performing serial follow up on patients.21 Computed tomographic (CT) venography (discussed below), which provides excellent data, might be considered–but not repeatedly–because of its high radiation dose. Magnetic resonance (MR) venography (discussed below) achieves variable results depending on the composition of the stented segment; ie, those stents with less stainless steel give rise to less artefact, and thus MR venography may be somewhat useful, whereas with those stents containing more stainless steel, the signal drop out means that establishing stent patency is not possible. In-stent restenosis cannot currently be quantified on MR venography, whereas it is possible on CT venography and CDUS. 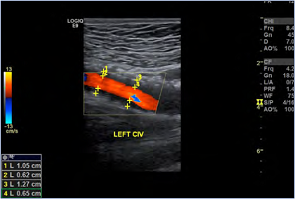 Figure 4. The degree of in-stent restenosis after iliac venous stenting can be quantified: (1.05-0.62)/1.05=40.9% stenosis. This patient was symptomatic with recurrent venous claudication at this time. Abbreviations: CIV, common iliac vein.

Indirect CT venography is the more commonly used modality; the aim is to achieve systemic levels of opacification. This is performed by injection through a peripherally sited IV cannula (arm, usually) at a rate of 3 cc to 5 cc/sec, typically with 100 to 150 cc of iodinated contrast at a delay of 60 to 120 seconds depending on cardiac output and the rate of injection.

Indirect CT venography is excellent for evaluation of acute deep-vein thrombosis to “rule- out” swollen legs (if normal, the deep venous system is unlikely to be at fault; this is especially so in bilateral lower-extremity swelling), in malignancy,26 and during stent follow-up in certain patients in whom CDUS is difficult (scarring/obesity, etc). However, if patients’ symptoms are unremitting or otherwise inexplicable with a “normal” indirect CT venography, we have learned to favor either direct CT venography or intravascular ultrasound (IVUS) (Figures 5-7). 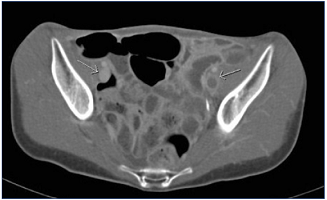 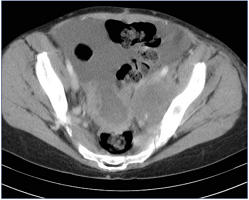 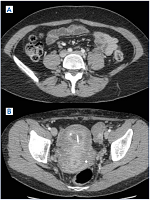 Direct CT venography is performed by injection of contrast into the affected limb, typically into the foot (Figures 8-9). The purpose of direct CT venography is to achieve a high level of contrast concentration in the venous system of the affected extremity; essentially, a “venous angiogram” can be obtained and therefore multiplanar reformats (MPRs) and maximum intensity projection (MIPs) images can be performed on the data set required.

Direct CT venography was first shown to us by the experts from Grenoble, France; it was a “Road to Damascus” moment; we immediately realized this would be an extremely useful technique in the investigation of patients with post-thrombotic venous obstruction prior to venous reconstruction.27 In fact, it has proven to be exactly this; namely, it identifies which of the veins leading into the common femoral venous “sump” carries the most blood, what we call the “dominant inflow”; we believe this is critical for planning ahead of endovascular reconstruction, in that subsection of post IF-DVT patients whose scarring extends down to the common femoral vein or below.28 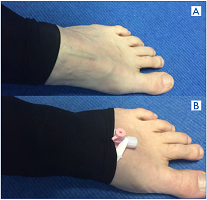 Figure 8. How to perform a direct computed tomographic (CT) venography. A) Roll up the Class 2 compression stocking to expose a vein. B) Place 20G IV cannula with injection port into vein; tape it down; roll stocking back over the IV cannula. It is now ready for injection. 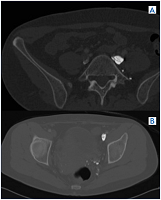 Figure 9. A and B) Note synechiae/scars inside the vein lumen in same patient from Figures 7 A and B, which was read as “normal.”

MR venography is now finally achieving the prominence it deserves in investigation of the iliofemoral venous segments.16,29-32 The techniques have improved considerably in the last decade and it has gone from being a cumbersome, slow, poorly performed, and difficult-to-reproduce technique to one that is now achieving mainstream acceptance and applicability. It offers huge advantages in terms of lack of radiation and lack of iodinated contrast. With increasing knowledge, it will, in my opinion, become the go-to method for investigation of IF-VO. In certain centers, it has already achieved that distinction, and the images acquired are excellent in terms of spatial resolution, identification of scarring, wall thickness, intraluminal synechiae, and so on.

The technique for performing MR venography is beyond the scope of this chapter. Interested readers are directed toward the references; it does require an interested and expert radiologist, as well as well-trained radiographic staff and top-of-the-line machines with the appropriate coils and software algorithms to produce diagnostic images. Many patients undergo MR imaging; as yet, unfortunately, relatively few patients have a good quality MR venogram (Figures 10, 11). 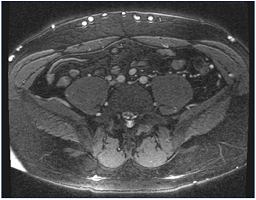 Figure 10. Magnetic resonance venography. Note multiple collaterals along the skin’s surface. The common iliac arteries are readily identified, but the veins are occluded and not seen. 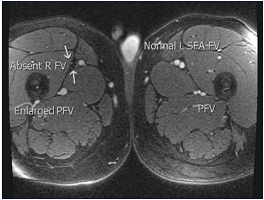 IVUS is an invasive technique that provides superb imaging of the internal lumen and surrounds of the iliofemoral venous system. IVUS has been around for quite some time,33,34 and its use has been extensively documented in the coronary circulation and more recently in both the venous and arterial systems. In some ways it was a technique looking for a “home,” but it has most assuredly found that in the iliofemoral venous segment, as well as through much of the peripheral vasculature, particularly to guide therapy.35 It offers huge advantages in terms of identification of luminal problems that are not readily seen on venography, even multiplanar venography.36-38

The VIDIO trial (Venogram vs IVUS for Diagnosing Iliac vein Obstruction)38 has demonstrated quite eloquently that IVUS changes the decision algorithms in a significant percentage of patients, and it is far superior even to multiplanar venography in identifying subtle lesions. It is fair to say that in patients with marked obstruction–for instance, due to tumor compression–IVUS may not be required (Figure 12); nonetheless, it improves many aspects of endovascular reconstruction, including stent diameter, stent length, and accurate identification of landing zones; post treatment, it can confirm adequate wall apposition and expansion as well as measure the stent diameter and area (Figure 13). In the future, it will almost certainly provide physiological data in the same way that standard transabdominal ultrasound currently offers, demonstrating Doppler characteristics as well as color flow. 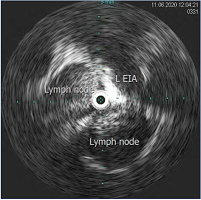 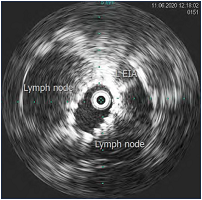 Venography for many years was the gold standard in identification of iliofemoral venous pathology but has gradually been replaced by cross sectional methods and now by IVUS. It is still very useful for identifying flow rate during a procedure, but more skill is required in identification of more subtle characteristics, in particular, subtle compression of the vein in an anteroposterior fashion, which can easily be missed even by the experienced observer unless a lateral projection is equally obtained.

For this reason, it is mainly reserved simply for identification of the correct path to follow during iliofemoral venous reconstruction, (Figure 14) and obliques are often essential for this. After stent placement, demonstration of rapid inline flow with abolition of collaterals is an excellent marker of success (Figure 15). Most experienced workers in this field do not perform catheter venography as a preoperative imaging investigation. 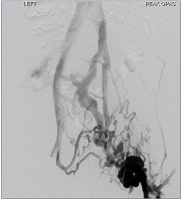 We are fortunate to have so many excellent methods of imaging of the iliofemoral venous segment. Currently, CT venography is probably the work horse, but in experienced centers, MR venography is already, rightfully, taking over this role owing to its many advantages.

Intraoperatively, a combination of IVUS and venography is the current ideal combination, whereas post operatively, follow-up of the patient with ultrasound appears the most prudent and sensible option.